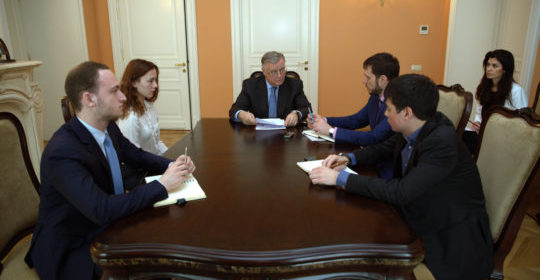 The programme was launched in 2016 and it includes internships for students of the Moscow State University at the leading foreign educational and scientific centres as well as the students exchange programmes. The students were offered to choose a summer school at one of six universities. These are the following universities: the London School of Economics and Political Science (LSE), Great Britain; The Institute of Political Research (Sciences Po), France; Oxford, Great Britain; Beijing University (China); the Hong Kong University (China); the International Association of Political Science together with the National University of Singapore (Singapore). In the longer term summer schools will also take place for foreign students at Russian Universities.

One of the requirements in the competition was to provide an essay with description of one’s scientific interests in the field of political science and to confirm necessary level of language.

As a result of the competition 4 winners were chosen who will get a scholarship for learning at summer schools. These are students of the Moscow State University from Moscow, Ulan-Ude, Nizhny Novgorod and Astrakhan. The selected programmes for learning are the following: two students are going to study at the Institute of Political Research (Sciences Po) in France, one of the students will study at the London School of Economics and Political Science and another one at the National University of Singapore.

At the meeting the students listened to the farewell words from Vladimir Yakunin wishing them well and success in the studies.

“For any student the opportunity to get financial support and to get training abroad is an amazing chance to broaden their horizons and to define the direction for their interests in the political sciences” – said Vladimir Yakunin.

“We expect that you will study hard and we hope that you will not only get new knowledge but also establish some new contacts. In the longer term, when you make decisions about your further education we are looking forward to seeing you at our Master’s programmes. Let alone, at the moment a new Master’s programme is planned to be launched in English language at the department of State Politics. The programme has been developed for the education of Russian and foreign students, especially from the CIS.”

The young people shared why they had chosen this or that school and programme and told about their future plans and expectations from the training.

“Why have I chosen Sciences Po?” – Karina Kurenkova, a third year student of the Faculty of Political Science of MSU who came to Moscow from Ulan-Ude explained her choice. Karina successfully participated in the selective competition and now she will learn at the Institute of Political Research in France. ”I’ve been aware of works of this scientific platform for several years, I keep a close eye on new articles at the Institute’s website, I enjoy reading new reports and forecasts, and I watch lectures online. At some point Sciences Po has even become my dream but unfortunately it was unreal due to financial reasons. That is why I am really glad to have this opportunity to get education at Sciences Po, one of the leading European Institutes of Political Research, to work with professors whose articles I’ve read and to ask them questions. I would like to thank the organizers for this opportunity!”

Intigam Mamedov, the second year postgraduate student of the Faculty of Political Science from Astrakhan,  is a member of the Council of Young Scientists of the Faculty of Political Science of MSU. Currently he works on thesis research on the Caspian region. In order to continue his research he chose the National University of Singapore.  Intigam shared his expectations from the studies: “The main goal for my participation in the programme is to get skills to use methods for empirical studies and to define their pros and cons. It is also important that the participation  in the foreign summer school will let me improve my level of English which will give me new opportunities to use foreign scientific literature in my research. As of the results of the study I plan to hold a workshop for my colleagues and to make a separate course.”

All the students who took part in the competition will be awarded with runner-up prizes that will be a good help for their further learning and scientific work.