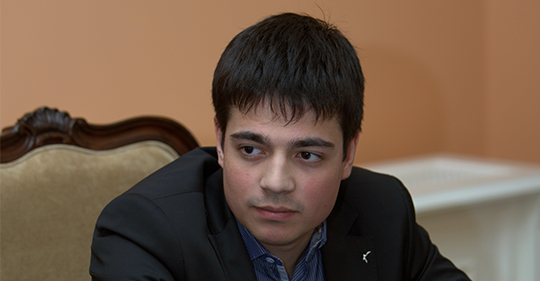 Intigam Mamedov is a post-graduate student, member of the Board of Young Scientists of the faculty of political studies at the Moscow State University, a participant of PolitIQ programme which was launched in 2016.

About myself. I come from Astrakhan – the so-called capital of Russia at the Caspian. Astrakhan is a colourful, multinational city at the bank of the Volga River. The multinational history of the city left its traces both in the architecture of the city and in the mentality of the citizens, in the peculiar features of their talking manner and so on. Having finished the school I entered the law faculty of the Astrakhan State University where I was studying international law. Then I decided to continue my education as a post-graduate student but by that time I had been more interested in research work related to international relations. It was the moment when I remembered my life-long dream to study at MSU. As for the choice of a faculty, I thought it was the best (and I was right) to choose the faculty of political studies as it is the best place to prepare political experts and researchers in the field of international relations.

What was the competitive selection for the stipend like? Was it difficult to take part in it?

The competitive selection included several stages. First, it was necessary to fill in and send an application form. Then the participants wrote a motivation letter in English and Russian languages. Also the basic criterion was to have a spoken level of English and to know some professional terms.

What other options of Summer Schools did you get?

Why have you chosen the National University of Singapore for your studies?

I am pretty sure many people have heard about the “economic miracle” of Singapore. I’ve been reading a lot about the development of the city-state at the XX century and at the modern period. Also I was interested in the way the country is managed and in domestic and foreign policy of  Prime-Minister of Singapore Lee Kuan Yew. Of course, I wanted to see it all with my own eyes, to get personal experience of communication with citizens of the country. It had just recently become independent but the population already has the high level of national identity. Besides, the Summer School at the National University of Singapore is held for the fifth time already and every year a number of participants are growing. The School’s administration is very meticulous when the choice of the teachers is concerned: they assess a number of publications, years of teaching, and, what is also important, the style and manner of teaching.

Which programme did you learn? How can this programme help you in your research?

The Summer School offered 15 courses and I’ve chosen “The Game Theory” course. Professor Justin Fox from the Washington University in St. Louis included the background history of this method, kinds and different models of the games in his programme. Special attention was paid to the application of the theory in socio-humanitarian research work. Most of the examples referred to electoral processes including the current election campaigns for the President of the US. The experience I got helped me understand the methodology of political research. Thanks to the Summer School I could understand that mathematical methods in general and the game theory in particular can be applied not only by mathematicians but humanity researchers as well.

At the moment I carry out a thesis research which is dedicated to the studying of activity of transnational corporations in the Caspian region. In my research I face the need for behavioral analysis of many regional and non-regional, state and non-governmental actors. It means that the application of the game theory in this research will be possible in the final chapter related to forecasting and scenario analysis of the energy policy (for instance, the analysis of the process of making the decision by Caspian states regarding the legal status of the Caspian Sea).

What was your first day at the University like? Was there anything that surprised you greatly?

First of all, I was greatly surprised by Singlish, that is Singaporean English. It is English language mixed with Malay, Chinese and Tamil words. During my first days there I thought I was the only one who had difficulties in understanding the local people of Singapore. But later students from the USA and Europe admitted they had the same problem. But when it was third or fourth day of our stay we all got used to it. By the way, young people (especially students) in Singapore have a good level of English. There were some problems only with the older generation and the administrative staff.

What is the academic day at the University like? What is the difference between the learning process in Russia and Singapore?

I felt the difference in learning processes since the very first day. The classes took place from Monday to Friday from 9.00 a.m. to 1.00 p.m. The duration of the breaks and the intervals between them are not stated and depend on the decision of students and the teacher. And following the difficulty of a topic we could have more or fewer breaks. It took us 2 hours (from 2.00 p.m. to 4 p.m. to do homework in groups. It was not an obligatory thing. However this method was popular as the teacher controlled the preparation process from time to time; he helped and explained.

The teacher and students have a common access to the file storage on Dropbox.com. Files with homework as well as recommended and obligatory literature are updated from time to time. That is why even at the first day all the students including me were prepared. Every participant had an access to the library of the National University of Singapore. But there wasn’t a great need for it as we had all the necessary literature. The main difference between the learning process in Russia and Singapore is the way they check homework. Everybody is supposed to have done it properly. There is no tradition in Singapore to check it. They use the learning time for discussing the most difficult moments.

Who is your favourite professor?

As long as I attended my section only, I can’t professionally estimate the teachers from other groups. Still, I managed to communicate with many professors outside the class activities – all of them are pleasant and interesting people. I’ve already mentioned Justin Fox – professor of political studies from the Washington University, St. Louis, USA. He appeared to be a very talented and diligent teacher who cared for the learning process and its results. He got his degree as PhD at the Rochester University.

What kind of interesting experience did you obtain in addition to the education?

It was interesting to learn opinions of the teachers and young people from different countries regarding the situation in the world politics. Their opinions appeared to be neutral. Many of them admitted that, in addition to western news channels,  they tried to watch news at Russia Today in order to create their own opinion  about the key international problems.

Are you going to participate in other Summer Schools in political studies? In your opinion, how often should a young political expert take part in such kind of schools?

Of course, yes. A young political expert should attend as many Summer Schools as he can. It’s the unique experience which one needs in order to grow the interest for the sphere a person is involved in. A lot of things a person learns at the lectures and from communication with others students cannot be found in books.

What are your further plans related to studies and work?

First of all, I would like to focus on finishing and defending my thesis. As for work, I am interested in teaching or something related to science and education. If I get the opportunity to have a job connected with multiple business trips I will go for it.