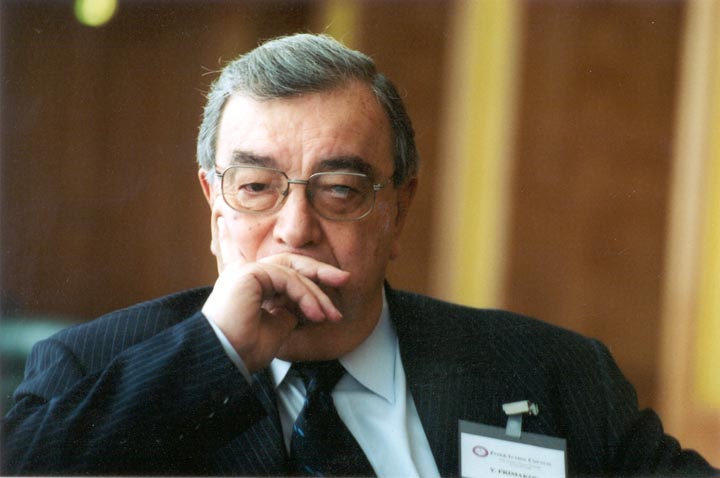 The following people took part in the event:

In his welcome speech Victor Sadovnichy said to the guests: “The Moscow University is proud of the fact that its life is connected with Eugeny Maximovich. He graduated from the post-graduate school of the University and later he established the Department of International Relations at the Economic Faculty and was in charge of it. Then he was assigned different posts of higher state authorities but he never interrupted his contacts with his dear Moscow University!

In 1998 Eugeny Maximovich was given the title of Professor Emeritus of the Moscow University.

Whichever rank he had – he always thought about people and of course about us – students and teachers of higher institutions.  In our country Eugeny Maximovich has become the figure, the personality everybody was listening to: the society, politicians. His public speeches attracted the entire elite of the country who listened to his not really long but very precise report about the situation and the future. And at once it became the guideline for the country.

At present I don’t know any other person like that in the history of our country, a person who could interact with the society so precisely and effectively and who would work for it.  Eugeny Maximovich did a lot for development of the Moscow University. In this lecture hall from this pulpit he was reading his lectures about modern politics, he answered endless questions from students. This lecture hall which we name after Primakov will always be in our history; and we are going to tell all generations of students that it was named after the outstanding person! ”

Eugeny Primakov also note: “The lecture hall got the name of Eugeny Maximovich Primakov and our family is really grateful to you, Victor Antonovich, Andrey Yuryevich, for this. Today is the day of his birth, October 29th. Eugeny Maximovich was first of all a man of science. It is the most important title he got. Though he used to be in charge of the Government and Intelligence Service and the Ministry of Foreign Affairs, he would always say: “I am an Academician!” For him it was the most important thing. And following this scientific tradition, keeping his legacy and honouring his name in this respect would be the most important thing for my grandfather ”.

In their speeches A.Torkunov and A.Dynkin also emphasized outstanding features of Eugeny Primakov as a politician, a state figure and a scientist.

After the ceremony the guests of honour were mentioning some issues related to preparation work before the II Convention of the Russian Society of Political Experts that will be held in Kazan from November 11 to November 13 2016. The Convention will become a platform for extensive expert discussions of political agenda of the Russian state and society.

A. Shutov said: “Eugeny Maximovich remained active and busy even during the last years of his life, when he was ill. And the idea to award the prize named after Eugeny Primakov to Alexander Galkin, the outstanding Russian political expert, at the upcoming Convention of political experts in Kazan is aimed to memorialize the name of Eugeny Primakov and commemorating his name should be as clear, pure and active as Primakov used to be, for the sake of the ideas he was developing. ”

At the end of the event the exhibition of books by Eugeny Primakov was held, with photo and video materials presenting the main stages of his life.